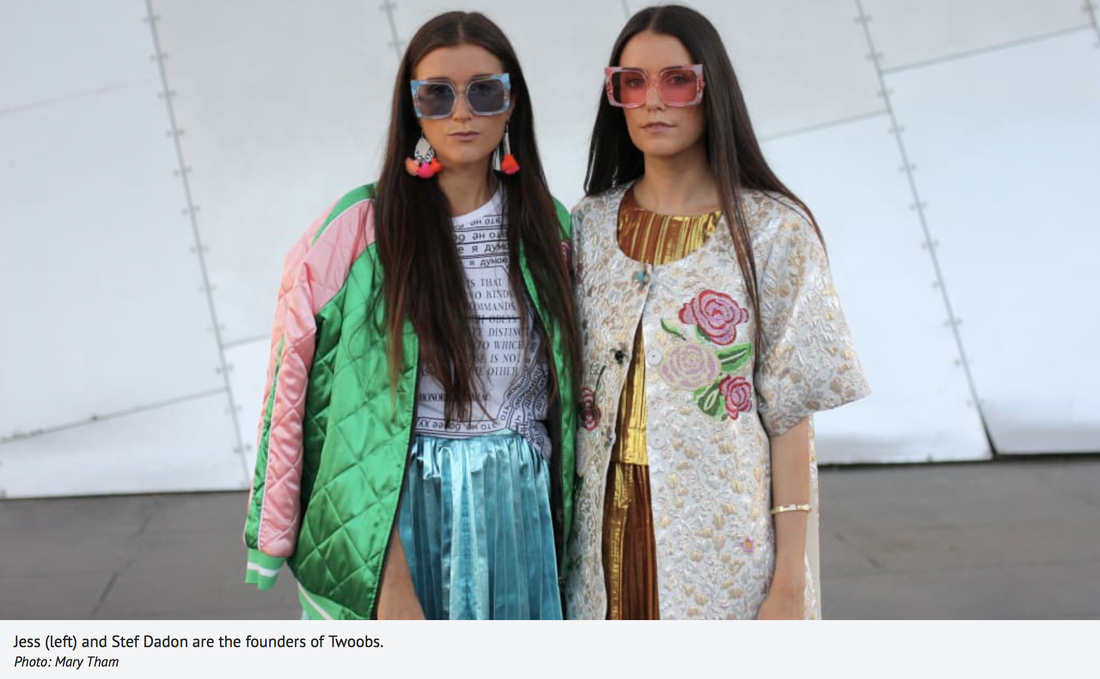 Aussie shoe sensations Twoobs have pushed bloggers Jess and Stef Dadon into a new realm. But before the success of their foam sandals took hold, the Melbourne sisters had to tour China in a dodgy minivan, do battle with disappearing manufacturers and pay models to wear bikinis in freezing New York temperatures.
The pair say their manufacturing mishaps and masterstroke marketing have led them to early successes – such as a sell-out collaboration with Gorman – they had never dared to dream of.
Fairfax estimates Twoobs' turnover for 2017 at $250,000 and the sisters say sales have quadrupled and are projecting turnover for the coming financial year of more than $1 million. Not bad for a two-year-old company employing just three people.
“We still always get excited when we see people wearing them in the street,” Stef says.
“We run up to them like, ‘That's our shoe brand’.”
The excitement is understandable. After all, the Dadons have no prior experience in the footwear industry and are still feeling their way.
“When we first set out to design them, we really did not know anything about shoe design and we just met up with anybody who we could think of who was working in or around the footwear industry,” Stef explains.

Twoobs, pronounced Toobs, was born when industry heavyweight Windsor Smith asked the Dadons to design a line of shoes. Known for their love of platform shoes through their fashion blog How Two Live, the sisters set about making comfortable shoes for any occasion.
Inspired by the results of the Windsor Smith collaboration – their five designs sold out in one day – they plunged into Australia’s $3.3 billion footwear industry.
Finding a trustworthy manufacturer in China proved to be the most challenging step.
“Very generously, a colleague of ours who manufactured shoes in China, invited us to China to show us the ropes,” Jess explains.
“He literally took us over the border to China in this weird minivan, and we ended up having to switch vans halfway through again, and we were really confused and kind of scared, and we just started meeting factories and manufacturers over there.
“We definitely did get a little bit carried away in the beginning I think. No one really tells you much about price, and things like that. So we were just shopping around.”
The disasters that followed included shoe samples going missing and one factory suddenly and permanently closing at Chinese New Year. The Dadons' misadventures in China was the subject of a presentation at the recent Pause Fest, titled “All the mistakes we made when designing and manufacturing shoes in China”.
The pair tried, and failed, three manufacturers before finding success with a fourth. It was a learning experience and a half, says Stef.
“I think it's always best to do your own research,” she says.
“People will tell you it's impossible to find small-run factories, but I think it is worth shopping around until you find the right one who will do small quantities and believe in your vision, and build it up from there.
“Because the last thing you want is to be stuck with a bunch of stuff that you can't move. You're better off selling out on your first day, and then building it up from there.”

Launching at New York Fashion Week
​
The brand was launched at the 2016 New York Fashion Week, but not officially. The Dadons spent $500 on three bikini-clad models wearing Twoobs shoes outside fashion week venues. Posing in -4C, the models grabbed the attention of photographers waiting outside the venues.
It created a buzz that seemingly hasn’t died down. The Twoobs 2017 collaboration with Gorman was a sell-out and in Jess’ words, “just absolutely mental”.
During their ups and downs, the Dadons have looked for advice from female entrepreneurs such as Sharon Thurin, director of healthy snacks company Slim Secrets, and Amanda Coote, founder of fashion retailer Forever New.
Thurin says the sisters have intuitive creative and social media knowhow, and have already come a long way in getting to grips with the retail sector.
“Without a doubt their ability to sell themselves and hence their Twoobs has helped make their brand a success,” she says.
“When I first met Jess and Stef they were both trying to do everything in the business together rather than allocating certain roles to each other so that they didn’t cross over and waste time.
“They have become better at managing their time so that they can work on growing the brand. In terms of hiring the right people to work with them in their business they have at times moved in the wrong direction, but always listen to suggestions and follow through.”